The birth of Blackjack

What is it that makes Blackjack such a loved game? I’d say there are 3 aspects to it. One, the social part of standing around the table with your friends. Second, it’s a relatively easy to play game so you can relax. Third, it’s the game that sparks the imagination because it’s one of the only casino games based on skill and not on luck.

There is much debate as to where and who created Blackjack, but it seems to go back to France. Here it was invented in the casinos around 1700. Different versions of the game were created in earlier years, but none of them as popular as the French invented it. Back then it was called Vingt-Et-un, which means 21. The game traveled to the United States by way of the European immigration in the 1800s. That was the beginning of what is today’s most renowned casino game. In 1931, gambling became legal in Nevada and thus Blackjack could gain more ground easily. Nowadays, it’s not just a prominent casino game but it’s also played online by players around the world. Online casinos offer different variations of blackjack, it’s a game that keeps evolving for centuries and that will continue to do so.

The popularity of Blackjack

The popularity of playing Blackjack in online casinos has been such that the makers of the game and software keep coming up with improved versions. Not only do the graphics of the game keep on getting better, but you can also comfortably play it from your phone. But that’s not the only thing, perhaps more importantly is that online casinos have come up with a live version Blackjack. That means that you get the charm and thrill from playing in a real casino from the comfort of your couch.

How to play Blackjack?

Like I mentioned above, Blackjack comes in different versions and therefore the rules and process of each will vary slightly. But today we’ll only get into the most known one of the Blackjack games. This game is played with a 6-deck or 8-deck “shoe”. That’s a funny word for the device you’ll see on the blackjack table that spits out the cards. Blackjack, like most other casino games, comes with a very specific order of the game. Beginning, play, and end. Below we’ll write out in a concise manner what the different steps are.

Blackjack uses the standard pack of 52 cards, but in most cases, a total of 312 cards is used (a 6 deck game). Beating the dealer is objective of the game, you do so by getting as close to 21 as possible without exceeding that number. That means that the most valuable cards you can receive when the game begins are a combination that gets you 21. The ace gives you the freedom to add the meaning of either 1 or 11. Face cards count for 10. Players now place their bet, which he should do by laying out chips on the table. You can place bets from as little as 2 or 5 dollars to a maximum of 500. The dealer will shuffle the cards at the right time, which he is reminded of by the plastic card he’ll find in the set.

The most elementary of all: in the order to play Blackjack you’ll need to buy chips to take part in the game. After you’ve done so, you place a wager. In order to start the Blackjack game, each player receives 2 cards. Players receive these cards face up and the dealer keeps one card in hand which is face down and one with the face-up. The one which is face down is called the hole card. The ultimate combination you could receive at this first deal is an ace with a 10 point card. The odds aren’t large, but it’s definitely possible.

The dealer is called ‘the house’ and like usually with casino games, the house has a slight advantage in comparison to the player. In blackjack that happens through several rules that are in favor of the dealer, for example, the fact that the player always has to act before the dealer.

The game gets interesting at the moment where the players have to decide whether they’ll “stand” (which means not asking for another card) or “hit”. The latter word, “hit” means to be asking for another card in the hope of getting closer to the count of 21. To summarize, a player may stand on his 2 cards or ask for more cards. But caution is needed, this amount needs to stay under 21. If the amount on the cards exceeds 21, you’ll lose and you’ll see the dealer collecting your bet.

Like I briefly mentioned above, the highest value you can have in Blackjack is if the first 2 cards you receive are an ace and a 10 card (this could be a picture or the number 10). This combination comes to an exact amount of 21 and this is what we call a “natural”. You’ll get paid out on the spot if you have a natural and the dealer doesn’t. The exact amount you’ll get is 1.5 the amount of the bet you’ve placed. In case it’s the other way around, when the dealer has a natural and none of the players has one, he’ll immediately collect the bets of everyone. In the case that both the player and the deal have naturals, you’ll find yourself in an even situation where the player takes back his chips.

Your most ideal situation is hitting a Natural combination, but not bad either is so-called ‘Splitting pairs’. This means that if you have two cards from the same ‘range’, you can treat these as two separate hands. Similar cards would be two sixes or two jacks. Now you’ll be playing with two separate hands, but do keep in mind that when you split you are required to place another bet of the same value. In the case your two similar cards are two aces, you only receive on a card. Last but not least there is the option of doubling down. You can do this when the cards you’ve been dealt are a total of 9, 10 or 11. 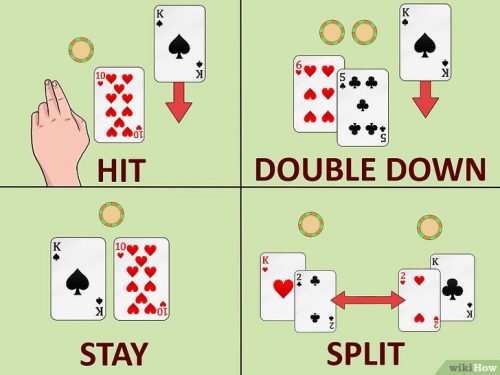 In blackjack, your main objective is to beat the dealer. To achieve that objective, there is an actual mathematically proven strategy to do so. This is called the Basic Strategy and it’s essential if you want to guarantee steady wins while playing Blackjack. Over the years this Basic Strategy has continuously been refined. Computer simulations have helped to create the perfect flawless tactic. The experts say that if you 100% follow this strategy, it’s in your power to reduce the house edge to 0.5%.

The Basic Strategy is a chart telling you exactly what move to make. It bases itself on the first 2 cards you get in comparison to the dealer’s card. This basic chart is handy, but it only covers decisions to make based on the first 2 cards. So as you can imagine, its power is limited. Therefore you also need to learn exactly what to do afterward.

The aim of using the basic strategy obviously is to win. But it’s not just for that purpose that you’ll benefit from using the chart. Other than maximizing your winnings, you also reduce your chance of busting. Or in some instances minimize losses. It’s a fact that when playing any casino game, the house will always have a slight advantage over you. Otherwise, they would be out of business pretty soon. We won’t explain the technicalities of the chart here, but it’s worth doing your own research to get a better understanding. 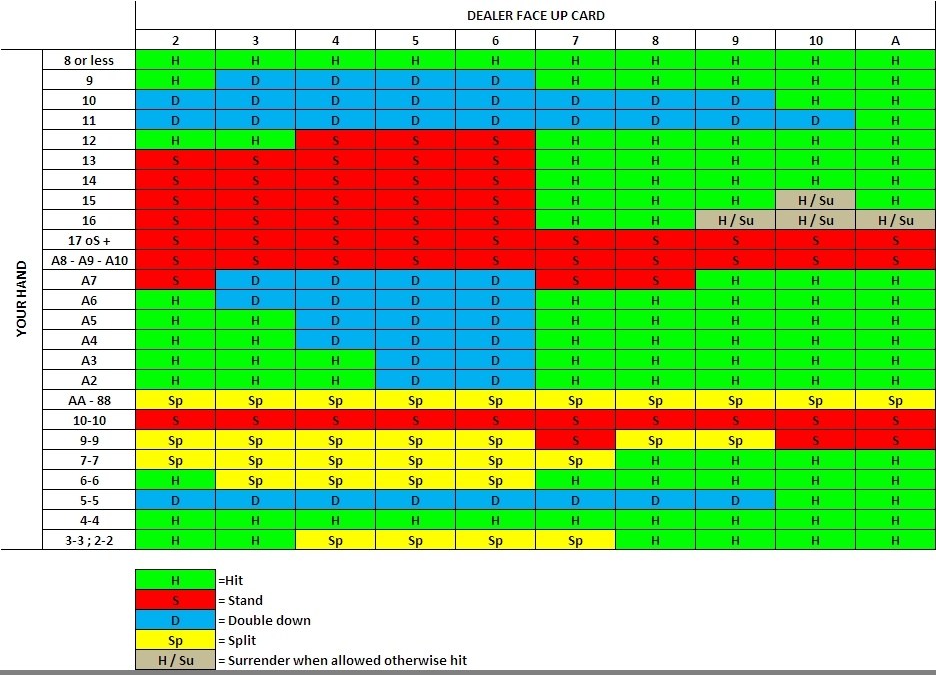