The poker hype started in the late 1980s and you can be sure its popularity is not going to stop anytime soon.

Poker is a card game that has a varying set of rules. You can play it either in a land-based casino or just as easy online in a live casino. Whatever place you choose to play poker, the environment is the same. You, and the other players, are gathered around a table each with a set of cards in hand. Whoever wins depends on the value that you hold in your hand. When it comes to the origins of poker, nobody is entirely sure where it came from and many nationalities want to claim it as their own. One thing is undebated though, which is the fact that poker is a hugely popular game to be played on any UK casino site.

Several events helped make poker so popular over the years. It for example changed from being seen as a game to a sport. This transition happened in the United States, in particular, thanks to mainstream channels that started to broadcast poker. Especially the high profile events such as the 2003 World Series of Poker helped to get the public’s attention. Thanks to the so-called hole-card cameras, viewers could get a real inside peek into the game adding to the excitement. But there might even be an easier way to explain poker’s popularity. That’s the simple reason that in the late ’90s when online casinos emerged, they started offering poker as well.

The World Series of Poker

There are a lot of elements in the game of poker that speak to the imagination of the player. For example the high stakes at the World Series of Poker. People all over the world couldn’t believe the entrance fee is an astounding amount of $10.000 and that anybody can participate. Of course only if you have that kind of money to spare. The World Series made people realize that they could become rich through poker. People loved the many rags to riches stories they heard in the media and thus, online poker became hugely popular.

We no longer have to drive to a casino to play poker and players love it. Many online casinos offer live poker on their websites. The software has become so refined over the years that it’s honestly not much different from the real deal. When live poker just started to become popular, many people were wary to hop on the bandwagon for a few reasons. The most important one being that they felt they couldn’t control the fairness of the game. After all, when you sit on your laptop you can’t see if the process happening on the table is legit and fair.

Even though you never have a guarantee for a fair-play when you play poker in the casino, it’s still easier to control than online. Nowadays there are several gaming authorities with an excellent reputation that monitor online casinos. Prior to playing, we recommend you check whether the online poker room has a license. These licenses given out by reputable authorities have created trust with players over the years and thus online poker has been able to thrive.

Basic poker rules / how to

There are different variations on the poker game, but by far the most popular is the Texas Hold ‘Em. Online poker essentially works the same as ‘real-life’ poker, so below we’ll explain the basics.

The game begins with 2 players on the table that have to post blinds. These are ‘forced bets’. A rule that is compulsory because otherwise, the game wouldn’t be fun. Each round different players must post blinds. That’s the only way to keep it fair.

After the blinds round, each player gets two cards which are called ‘starting hand’ or hole cards. The player to act is the one sitting on the left of the big blind. He has 3 options on what to do next.

Call: You put down the same amount of the big blind
Raise: When you raise you to increase the bet.
Fold: You throw away your hand (If you have shitty cards, for example) 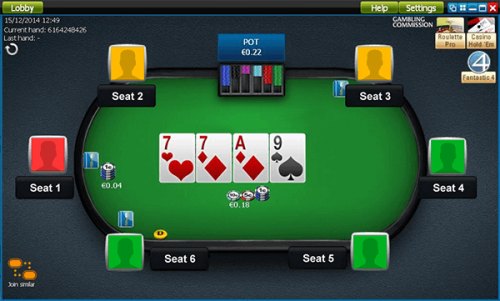 After the pre-flop, the next round begins by dealing around 3 community cards. Now you use those 3 handed cards and your private cards to form a hand. This is where the strategy comes in. In addition to the options of bet, call, fold and raise, in this round the player has the option to check. This means you are giving the action to the next player besides you.

At this stage another card is thrown in the mix, so now there are a total of 6 cards to form a hand. This is an extra advantage, so it could possibly make the game very interesting. The betting process is the same as explained in the previous. When everyone has decided on their move, the final round kicks off. It’s called the river round.

This is the point where yet another additional card is placed head-up on the table. In the process of the game, this is your final chance to make something out of your hand. This round is played the same as the previous one, the difference being that you now have a total of 7 cards to form your 5 card poker hand. Last but not least: the showdown. After everyone has settled their cards, everyone shows their hands. Poker is an all or nothing kind of game, where only the one with the best hands takes home the prize. You can imagine that the odds of winning also decrease if you play with more players. 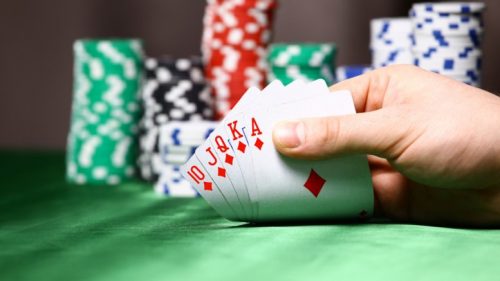 Poker isn’t just a game of numbers and playing smart, it’s a game of the mind too. And any game involving tricks involving the mind requires a strategy. It’s important to continuously assess the situation, observe your opponents and their body language. Bluffing is all good, but make sure to do with a purpose. Not just for the sake of it. This is where the smart player differentiates itself from the bluffer, they know why they do what they do. Keep your composure at all times under any circumstance and once you’ll learn how to do that, the game is essentially yours. Make calculated decisions, don’t go overboard with the stakes and just stay balanced.