Narcos is a hyper-popular slot by NetEnt, based on the Netflix series “Narcos.” It was released in May 2019, making it one of NetEnt’s more recent releases. Considering the popularity of the TV series, it’s no surprise that Narcos the video slot became a hype too. So let’s see what this slot has to offer. 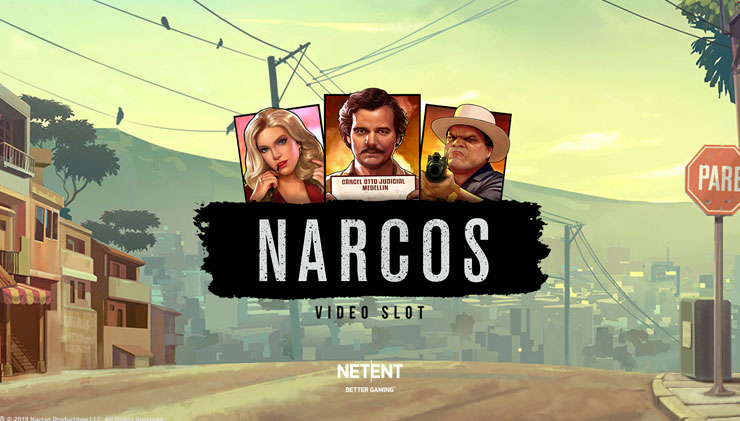 The Narcos slot comes with 5 reels, and a total of 243 ways to win. Original Narcoss TV characters appearing on the screen is what makes this slot exciting to play. A few of the slot’s top features are the Walking Wilds, Free Spins, and two innovative features called Drive-by and Locked Up. This slot is pretty straight-forward to play, but if you want to practice it first, you can do so on one of the UK casinos we have featured here on British-casinos.co.uk.

This part of the slot, setting up and placing your bets, works the same as just about any other slot. You can click on the coin range to adjust the value with the +/- icons. Also, set up your Bet Level, you do this in the same way as the Coin Value. Now that you’ve modified the settings, merely hitting Spin will get you started on the slot. Select Auto Play if, at any point, you get tired of clicking on spin the reels manually. Hitting spin will set the reels in motion

The moment where only Locked Up symbols and Golden Briefcase symbols appear on the reels, this is when you’re hitting the winning streak. An exciting moment in the game, because during these rounds, one of the following 3 things will happen. You either hit a Multiplier, you can Upgrade Symbols or get a Big Starting Value.

The Drive-By feature happens in the main game, and you activate it randomly during any spin. When the feature is triggered, expect a load of bullets landing onto your screen. The good thing here is that premium symbols will now turn into your wilds, which significantly increases your chances of winning. 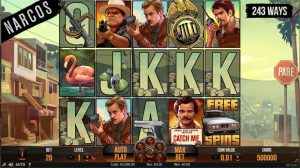 The Walking Wilds feature is similar to some of NetEnt’s other slots; it’s triggered when a Wild symbol makes a winning combination on the reels. As a consequence, the Wild stays on the reels and will move horizontally on the reels as you keep spinning. This process continues until there are no Wilds left on your reels.

Last but not least, the Narcos slot also comes with several opportunities to have some Free Spins. IN full Narcos style, you get these free spins after a shootout happening on your screen. You get 10 spins to start with, and additionally, you can land more because the Drive-by feature can trigger additional spins.

Narcos is a very decent slot, and especially if you appreciate the Netflix series, you will enjoy this game. It’s packed with features, different rounds of free spins, and more exciting stuff. You can win a max of 1506x of your stake, which is decent but not the highest slot prize out there. RTP is a generous 96.23%. For its crisp visuals and excellent gameplay overall, you should give this slot a try.